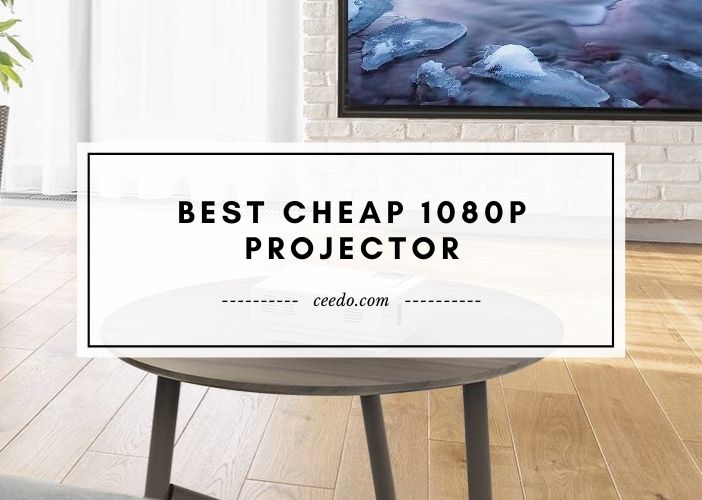 The general rule when shopping for projectors is to consider those with high pixels. A higher number of pixels ensures that you enjoy sharper and more vivid images. That’s pretty straightforward.

Thus, 4K projectors remain an envy for anyone enthusiastic about the inevitable transformation from bulky LED TV screens.

But since 4k models don’t come cheap, the clamor for projected pictures shouldn’t stop you from considering the best cheap 1080P projector for your entertainment and professional needs.

While 1080P projectors also can deliver high-quality images, they are more friendly to your pocket. But that’s not standard with all the models in the market. So, shopping for a cheap 1080P projector can be a hit or miss.

This article will help you as a novice projector shopper to understand the factors that you need to take into consideration. At the same time, if you have been through this process before, we make it much easier by listing and reviewing some of the most precious models.

YABER is a reputable brand in the projector manufacturing industry. Among the company’s prolific list of projectors is the YABER Y31 LCD LED Projector. It packs interesting features to deliver a stellar viewing experience wherever you go.

Besides, it is a fantastic device made from high-quality materials after an intricate manufacturing process. The YABER Y31 is an LCD projector that uses a LED light source a large screen display. But beyond the large size, the company focuses on picture quality and clarity.

The highlight of this device lies in the combination of a high display resolution, a high brightness level, and an extremely enormous contrast ratio. It is a real 1080P native resolution projector that supports media content of up to 4K resolutions. Thus, you have the luxury to enjoy unbeatable clarity.

Of course, the high contrast ratio of 10,000:1 ensures that you achieve the most detail in the pictures while a brightness level of up to 7000 lumens guarantees clarity and vividness in an unbeatable way. These features are better than what most more highly-priced devices pack.

Finally, it is essential to note that achieving a perfect image alignment is pretty easy with the YABER Y31. You will first need to try out the physical alignment but there lies more excitement in the 4D auto vertical and horizontal correction of ±50.

If you are looking for a projector that can withstand extensive use without showing any signs, the DR. J Professional HI-04 meets the bill. The device features a durable protective casing that is resistant to scratches or dents and reliably protects the system from spills or accidental falls.

It features a sleek and portable design. However, the main highlight of the design is the fact that the entire system is pretty easy to use as its control buttons and dials are conveniently positioned at the top of the device. The positioning of the dials makes them pretty accessible.

Apart from the sleek and durable hardware features, the projector takes pride in a range of interesting functional specifications. To start with, it packs all the relevant input and output connectivity options.

It features an HDMI port, a USB port, a VGA port, and an AV in/out. Moreover, the DR. J Professional HI-04 is also compatible with a USB flash drive and a TF card. The wide connectivity options bring versatility as you can use the device with any media content devices.

The DR. J Professional HI-04 projector is one of the most silent projection tools that you will come across, thanks to the advanced cooling system that the manufacturer deploys. This ensures that you enjoy your videos and audios without any background noises.

The device is a true 1080P native resolution projector that blends the high resolution with amazing brightness and contrast ratio of 6800 lumens and 8000:1 respectively. These features not only guarantee high-quality images but also allow you to use the device in nearly all lighting conditions.

Well, the AK-30 is a pretty versatile device that’s ideal for a range of professional and entertainment applications. You will find the projector usable in meeting rooms, classrooms, family parties, and general home theater applications.

Besides, the high brightness means that you can use the projector in outdoor or fairly bright spaces. And the fact that the projector features an extra-large display of up to 300 inches gives it further versatility as you can use it in large spaces for a bigger audience.

Finally, the fact that the company deploys a LED light source into the manufacturing of this projector means that you can use it for long hours without hurting your eye. LED light sources aren’t direct sources hence protect your eyes from irritation.

While the QKK QK03 Upgraded Wi-Fi Projector remains one of the cheapest projector models on this list, it does come with some interesting features. It blends convenience, versatility, and performance in a very competitive manner.

The first interesting feature is its fantastic connectivity features. The QKK QK03 comes with all the essential hardware connection interfaces, which is quite universal among projectors in this category.

However, the greatest inclusion is the Wi-Fi connectivity option which allows you to synchronize the device with your phone’s screen. You don’t have to worry so much about your phone OS as it is compatible with both iOS and Android phones and tablets. The Wi-Fi option also enables a direct connection with your router.

The QKK QK03 is a 2020 upgrade of the previous QKK projector versions. So, it comes with a higher brightness level of up to 4500 lumens and a 720P native resolution. While these features don’t match the industry standards, the device reliably supports 1080P displays to provide great viewing.

Apart from image adjustment and alignment, the other primary challenge that many people experience when setting up a projector is positioning. The company acknowledges that you can’t set up a projector conveniently without a proper stand. Thus, this machine comes with a free projection stand to settle your setup issues.

TOPVISION gifts students, travelers, and homeowners a 1080P supported projector to enjoy watching videos and playing games. And as a reputable market leader, it is difficult to fault the company’s TOPVISION T6 4500L Portable Mini Projector.

The device features 60,000 hours of battery life, which is unachievable with most projectors with the kind of power that the T6 has. Since the battery life of a projector determines its longevity, you can conveniently use this device for several years without any maintenance costs or lamp replacement.

Interestingly, the TOPVISION T6 4500L an amazing projection size of between 72 and 240 inches. Such a feature makes it ideal for all audience sizes. Besides, it achieves this with a convenient throw distance of between 6.8 feet and 22 feet.

Can you watch a video without sound? While that may be possible under certain circumstances, it won’t be as entertaining and enjoyable as it would with a high-quality sound system. The company ensures that you enjoy an incredible sound system wherever you are with the inbuilt Hi-Fi stereo speaker.

While the T6 mini projector is compact, lightweight, and arguably one of the most portable projection machines that you will come across, the inclusion of a 100-inch portable screen makes the device a true projector for the road.

Interestingly, buying cheap projectors is no different from shopping for high-end projector models. While the threshold may not be as high as those of high-end options, the considerations are the same. Let’s take a look!

So, if you intend to use a projector in areas that have ambient light or in larger spaces, it is important to consider options with high brightness levels. Notably, 1080P projectors have a baseline brightness level of 2000 lumens. Any device with a brightness exceeding that is pretty ideal for entertainment purposes.

This will probably come to you as a surprise. But projectors, despite not featuring screens of their own, also display pictures in pixels like tablets, smartphones, computer monitors, and TVs.

Therefore, while all the devices on this list can support 1080P content, the native resolution of a projector becomes a factor worth taking into consideration. Opt for devices with minimum native resolutions of 1280 x 800 pixels.

A high contrast ratio implies that the darks will be very dark while the whites will look brighter. But what’s the baseline when it comes to the contrast ratio of a projector? Well, 1000:1 is practically okay. However, projectors with higher contrast ratios will always make a difference.

One of the most common challenges that starters experience when setting up a projector is the concept of getting the image perfectly aligned on the projection surface.

When physical correction doesn’t achieve a perfect square on the screen, the keystone correction saves the day by digitally altering the alignment of the image. So, consider devices with about ±15.

Lens shift also helps to address image alignment. But instead of altering the image as with keystone correction, lens shift works by adjusting the angulation of the lens.

Projectors are not autonomous devices. So, irrespective of the device that you will end up with, consider the available input and output options. These options allow you to connect the device to a phone, computer, speakers, and a range of other devices.

Common input/output modes include an HDMI port, a DVI port, a VGA port, and a Composite port. Any two of the options mentioned are pretty good in a projection device. also, look out for a 3.5mm connector if you will need an external audio setup.

The best cheap 1080P projector is an incredible replacement for the bulky LCD TV screens. They are immensely portable hence ideal for a range of purposes. Campers, homeowners, travelers, and students will find them interesting gadgets to add to their shopping lists.

But despite being impressively portable and moderately priced, cheap projectors pack amazing features. They are better performers and more versatile than TV sets.

We have explored some of the most interesting models in the 1080P category. While you don’t have to choose from among the models in this article, they provide you with an outline of what to expect in your mission to own a cheap 1080P projector.