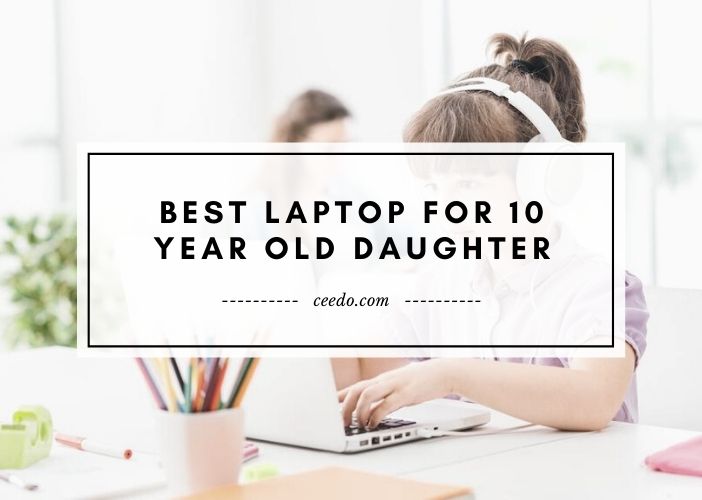 From the size, and if they will be able to carry it to school, to the security and ruggedness, you need to see to these things along with internal specifications to get the right one.

Even for kids today, laptops have become an integral part of their education and entertainment, which is why it is imperative that you get a good one. Investing in the right device also means they can use it through middle school without needing to change it.

To find the best laptop for 10 year old daughter, keep these factors in mind and check out the list of models below. Hopefully, crosschecking them with your own preferences can help you find one in no time.

The Lenovo Chromebook C330 comes with a lot of easy-to-use features that suit kids well with their work. This can be converted into a tablet when required because it has a 360° hinge that allows you to freely rotate it without fearing that it might break.

The laptop itself is lightweight and thin which makes it ideal to carry to school and is overall easy for each child to hold onto without the fear of dropping it.

Online security is a big thing, especially when the laptop is for kids. The Chromebook provides you with built-in virus protection. You can install separate anti-virus systems if you want, but this does take care of all the basic protection required.

Being a Chromebook, not a lot of setup is required. If you have a Google account, all you have to do is log in to be able to access everything you need. It is also great for kids who are not aware of how to set up a new laptop from scratch.

If this is for school, the high battery life will surely be useful. 11 hours can get you through a whole day of school and will still have some battery life left for afterward.

The ASUS VivoBook S15 S533 is known to be one of the more affordable yet high performing laptops out there. This will prove to be a good choice if you want to get a laptop that your daughter can continue using for years to come as she and her work advances.

With the 10th generation processor, you can rest assured the laptop will survive for long, and can even help your daughter pass through middle school.

It comes with a metal chassis, which not only adds to the outlook, but also ensures that it is protected, strong and sturdy. The edges are diamond cut, which makes it easier to open and close for kids.

You can even get your own choice of color to make it a more fun experience for kids. Choices are from a bold green, red, black, or white, whichever the child prefers instead of a boring grey.

The laptop also features a backlit keyboard which makes it easier for kids to find keys in the dark. Overall, it weighs less than 4 pounds and has a slim construction. You can slip this in a schoolbag alongside books without even noticing the extra weight.

It also runs for 15 whole hours on mixed usage. Even if a lot of videos are played, it will still make it through a school day.

If your daughter loves gaming and you want a laptop that serves for study and entertainment both, this Lenovo Flex 14 is a good option. It comes with the AMD Ryzen 5 3500U processor plus Radeon Vega 8 which makes it suitable for gaming and streaming videos at a high resolution.

The laptop also includes the Windows 10 protection which helps to keep viruses and malware at bay. This is a big concern when kids are using laptops since they aren’t fully aware, but with features like this, you can feel safer.

Furthermore, there is a true block privacy shutter that can close the webcam when it is not being used. You don’t have to worry about anyone hacking into the webcam thanks to the Windows protection as it is, but this adds an extra layer of safety.

For a gaming device, this has a very impressive battery life of 10 hours. This enables children to take it to class, and bring it back with enough charge to enjoy a good game as well.

The Active Pen is included with the laptop. Using this your daughter can freely draw and sketch without wasting paper by turning this into a tablet.

The HP Chromebook gives you complete access to all the Android apps you want and will make it a fun experience for your daughter. If you are not keen on handing a cell phone, but still want them to be able to enjoy android applications, this will serve as a good alternative. Not to mention, they can get other uses out of it too.

It comes with the Intel Celeron N3350 processor which provides just enough power for these small tasks, and will do well for basic school work and entertainment.

Speaking of entertainment, the laptop comes with dual speakers to let out loud sounds. Since earphones are not always recommended for children, this can serve as a good alternate.

Even though this is targeted for children, it has a good storage space of 32GB and comes with an additional 100GB of cloud storage as well. As most schools have moved online, this provides the perfect space to store all those online classes.

To complete the deal, you get a 10 hour and 30 minutes of battery life. This will do well at school physically, and will be able to help you out during back to back online classes as well.

The Microsoft Surface Go is for those kids who already have the hang of using a laptop because it can be used in multiple ways and forms, all of which will be a waste for a newbie.

It even has the stylus included for more precision. If your daughter or son loves to draw, this would be a good option where they can start out with their digital art.

It comes with the Intel Pentium Gold processor that provides good power for these light-handed works. It might not be the most powerful out there, but it will be more than enough for kids today, and for a good while in the future as well.

The laptop weighs a mere 1.15 pounds which is incredibly low. 10 years or not, anyone would be happy to carry this in their bags.

Windows on this can be run in S Mode which increases security and betters the performance. These are very crucial when buying a laptop for a child since they are more vulnerable to cyber-crimes.

Before deciding on a laptop, itself, you want to decide on the operating system that is suitable for a 10-year-old. The main options here lie between the Windows 10 and Chrome Operating System from Google.

We will rule out of the MacBook completely because it is way too expensive and unnecessary in this case.

Windows 10 is a good option for children because it has a lot of security enhancements and will prevent certain applications from getting installed if they are not available on Microsoft Store.

This means you can block certain applications and games so they do not get mistakenly downloaded or become distractions for your daughter.

The Chrome Operating System is useful if you want the children to be able to use applications from Google play store on the laptop instead of getting them a separate smartphone or tablet.

The best laptop for 10 year old daughter should come with a good battery life. Since the laptop will not be used for heavy-duty work, you expect that the battery should last at least 8 hours, if not more.

This is also important if the child wants to take the laptop to school, in which case a longer battery life will be required to hold it up through a day’s worth of classes.

Choosing a processor depends a lot on how you plan on using this laptop. For example, if it is being used for simple tasks such as writing papers, taking notes, playing a handful of games, or making slides, you can opt for the Intel Pentium or Intel Celeron processors.

On the other front, you have the MediaTek and AMD Mobile processors as well which are equally suitable. All of these are some of the low performance and budget laptop processors which would be optimal for kids.

However, if you think more power is required for work, such as doing classes online or regularly streaming videos on YouTube, a Core i3 processor would be better and would last longer as well.

When I come to storage you do not need a lot since this is mainly for children. You can go for a hard disk drive (HDD) storage instead of a solid-state drive (SSD).

Even though the SSD is faster, it is more expensive and generally provides a lower amount of storage space. It does not play a big part in the usage here, which is why the hard disk drive would be a better option.

A good memory allows for smooth multitasking. And even though a lot of work is not expected, go for at least a 4GBRAM for kids who want to use the laptop occasionally.

For use at school, homework, or online classes it is recommended that an 8GB of memory is used. It will make sure that the device has a good speed for the work it does, and will allow your daughter to occasionally play games or use it for entertainment besides school work only.

Buying devices for kids can be tricky. Besides having good specifications, it also has to be good enough for school and definitely a durable one for the small mishaps.

To buy the best laptop for 10 year old daughter you might have to dig a little deeper, and maybe even do some additional research, but it will all pay off in the end.

From making sure the size is right to have the right parental controls, every little thing will matter since having online security is a big requirement today. We hope this article can act as a guide so you can make an educated purchase.